How To Improve Fast On Guitar 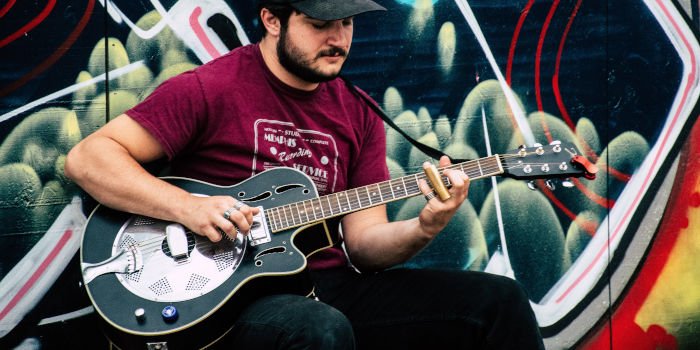 If you want to improve fast on guitar then I have a killer tip for you.

While you could practice the guitar more or keep recording yourself, you could get out and go to every local jam.

Go to as many local jam sessions as you possibly can.

Getting up on stage and trying will push you further, harder and faster. And so you’ll improve your guitar playing faster.

You might have to get over the fear of playing the guitar in public (a big one!) or the even greater fear of failure (getting bigger). You’ll also face an 800-pound gorilla. This is the fear of public humiliation and is quite a shocking beast.

However, the dirty little secret is that most of the people there have tried and failed a million times on that stage. They keep coming back as they can learn from others who are older and/or more experienced.

Trust me you’ll learn much faster if you reach outside of your comfort zone and just try. That’s all, it’s just trying.

You will need to learn some blues forms and how to solo in the blues style. Once you have the basics down, get out there and give it a go. Even if you suck, keep trying and you’ll get there.

Also if you seem approachable, you might be offered some gigs or the opportunity to join a band or two.

Some basic rules for Jams

#1 Check it before playing

Turn up once to check it out, get talking and build some friendships. You’ll be able to size up the people and their playing level and see if you can fit. Sadly, there are some jams that are like cliques. So you’re unlikely to play at these unless you know the right people. Be warned.

If you’re going to play, turn up early, sign up and thank the guys who are running it. They probably aren’t getting paid to be there, so the odd free beer or thanks goes a long way.

If someone queue hops, don’t get mad – just sit tight until it’s your turn. No one wants to befriend a person who starts a fight. Also, don’t create problems or queue hop. It’s not cool or worth it.

Get ready to play before it’s your turn. Tune and warm up.

#5 Leave your giant rig at home

Don’t take a load of guitar gear. If you want, bring an effects pedal or two, but not the whole system. You want to maximise your playing time not waste time setting up.

When playing, listen and try to react to what’s being played.

#8 Never hate on the backline!

Never, and I mean never complain about the amps or other gear there. Try your hardest to play your best with the provided gear. Yes, even it’s completely dud and moments from death. Of course, I’ve been there too and survived!!

Spend a moment to talk with and compliment every musician who you played with that evening. Something simple goes a long way, for example: “hey dude, I loved that turnaround you played into the second chorus”. Doing this creates a great impression and will go a long way to getting you gigs, students and make it easier for others to want to play with you.

Try and pick out the handful of people who are insane players. Befriend them and try to learn all you can from them, even if that means becoming their student.

Find out who plays in a band and become a fan. We all need fans, even one more fan helps.

Stick around for a while after you’ve played. If you leave straight away, it’s like your only there to show off and you don’t care about the hard work others have put in to make it a great night

Attend as often as you can.

Stay humble, have fun and  …

Remember, Thanks the organizers.

Trust me you’ll improve fast on guitar if you follow this tip.  Leave me a comment below if you’ve used this tip! Give it a go!