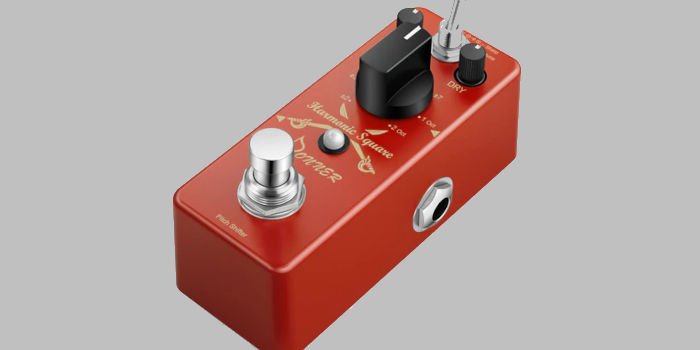 A note before we get started: the folks at Donner sent me this Donner Harmonic Square Octave/Pitch Shifter Pedal to review. So while I got it for free, the following review is my honest opinion.

I’ve always wanted an octave or pitch shift pedal. A few years back, I got my hands on a BOSS OC-2 but sold it on when I realized I could double my cash overnight. I was a broke musician! Darn!

So I’m starting from a place of knowing a little bit about octave pedals. I have dreamt about owning a Digitech Whammy, however impractical such a pedal would be on my pedalboard!

Anyway, the Donner Harmonic Square is an excellent mini pedal that offers a range of superb tones, including hollow-sounding choruses to octave down and octave up.

Save 15% by using the code ASHLEY on checkout!

Donner is a fairly new entrance to the market yet offers some exciting guitar effect pedals and musical instruments in general.

As a Chinese manufacturer, they focus on producing budget-friendly items over wildly thrilling new designs.

I’ve known about Donner for years, but they recently popped up again thanks to Tomo Fujita, who I follow on Facebook.

As a humble guitarist, I’m nowhere near Tomo’s god-like ability. But I don’t let that fact affect me! 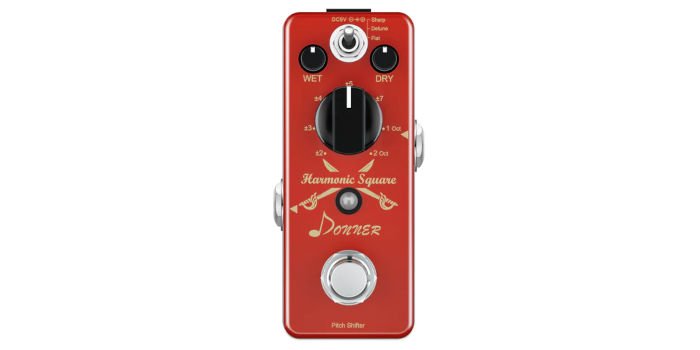 The jack sockets are screwed in, meaning they’ll last longer. The main dial and toggle switch feel rugged enough to withstand some abuse.

While the two smaller control knobs aren’t bolted in place, they are low enough to be safe from harm.

The footswitch is easy to use, the 9 volt DC input is well placed, and the LED is bright. As there’s no battery slot due to its size, the pedal is painless to deal with.

Overall, Donner has built their mini range to last and take years of abuse. Not that you should abuse them! Just that they are well-built pedals.

At first glance, you might mistake how this pitch shifter pedal works. So it’s worth having a look at the controls.

The top row of controls consists of a wet knob, 3 position toggle switch, and a dry knob. The larger knob in the middle is the pitch change knob. Let’s have a look at each.

The toggle switch allows you to change the pitch between shift up (labeled: sharp), shift down (labeled: flat) and a slight detune (labeled: detune). 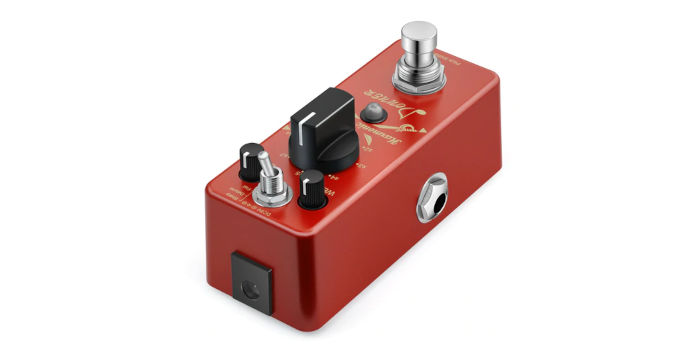 Before writing this review of the Donner Harmonic Square Octave/Pitch Shifter Pedal, I spent quite a bit of time playing with it.

Octave and pitch shift pedals can be riddled with pitch tracking issues, where the pedal takes a few milliseconds to catch up with what you’re playing. Thankfully, the Donner doesn’t have these issues, especially in a noticeable way.

I did notice when set for down 2 octaves, it doesn’t pick up the first five frets of the low E string. This is hardly surprising, given how low those notes are but something you should be aware of if you’re a bass player.

My two favorite settings after extensive testing aren’t that different from each other.

I love the octave-down sound, especially when in the mid-range of the guitar. The settings that work for me are keeping the wet knob on full, the dry knob at 12 o’clock, the pitch knob at the 1 Oct mark, and the toggle on the Flat mode.

These settings sound killer and produce a really pronounced octave down, which is ideal for doubling up a wimpy sounding clean guitar or with fuzz to add something different.

My other favorite sound involves flicking the toggle switch up to detune. Doing so creates a hollow-sounding chorus tone, much like the tones produced by the BOSS Dimension C. I’m not a massive chorus fan, but this sounds lovely.

For me, the octave-up doesn’t hold any appeal, and while the Harmonic Square is great at these sounds, it’s not a mode I’ll use that often.

I’m quite tempted to get another one, so I can run my two favorite settings side by side and so don’t need to flick the toggle switch!

I’m glad years after owning a BOSS OC-2 that the Donner Harmonic Square Octave/Pitch Shifter Pedal came into my life! It’s far more versatile and affordable than the BOSS.

If you prefer to power your pedals using batteries, you’ll need to find some way to hook a battery up as it doesn’t have space for one, being a mini pedal and all.

After some experimentation, I’ve found a few sounds I love and ones I’ll continue to use. My only issue now is my pedalboard is already jam-packed, so it’ll be a case of what gets removed to allow me to get this Donner pedal on.

So, if you’re looking for a pitch shifter that takes up minimal space and offers some fantastic tones, you’ll want to buy the Donner Harmonic Square Octave/Pitch Shifter Pedal!

Remember to use the code ASHLEY on checkout to save 15%!