How To Find New Guitar Tones 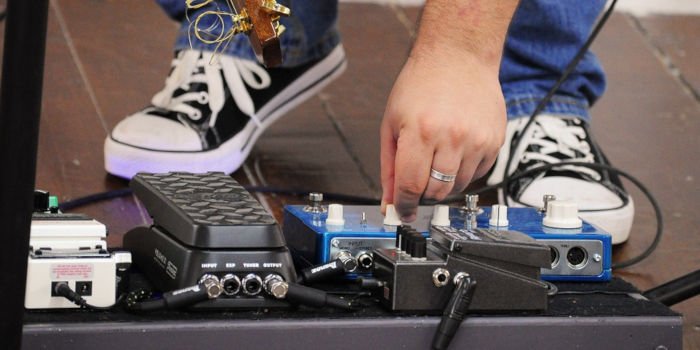 A few days ago I was trying to come up with some new guitar tones for an upcoming gig. Yep, I spent some time geeking with pedals, different guitars and tweaking the amp. But, I found some great new guitar tones to use.

Here are a few short insights that I thought I’d share with you. So here’s how to find new guitar tones using your existing gear. It’s time to unlock what you already own and be more creative!

Think about the FX chain

Everything affects your guitar tone. From the number of pedals, you have to the connecting cables. So, moving one or two around in the chain will have an impact on the guitar tones you’re able to create. If you’re searching for new guitar tones, then start by moving a pedal or two in the chain.

For example, having your Wah first in the chain will sound completely different from placing it after all your drive pedals. Try it. It just might change your Wah’s location in future.

During my geeky time, I was trying to come up with tones which sounded kinda Synth-y. I wanted to use my Duo Jet for the Bigsby as I can use it to mess with the pitch.

So guitar selected! Next up I tried using my RAT distortion for a fat overdriven guitar tone! Nice! I then added a short delay, 100ms to be exact. This was set with two repeats and so it was just audible. While you can’t hear the delay repeats, it adds depth to the sound.

Although this sounded great, the guitar tone wasn’t fat enough. Luckily my RAT sits after a compressor pedal. So I clicked that on and this produced even more distortion and sustain from the RAT.

I wanted to throw into the mix a Phaser pedal. It’s new, barely used and was a bit of fun. I tried adding it at the front of the chain – didn’t change a thing. Darn! How about halfway through the chain? The next minute or so involved some pedal moving.

With the Phaser inserted instead of my booster, the most unholy guitar based Synth sound was created. The perfect guitar tone for the song! Moral – trying pedals in different locations is worth it!

The biggest change to your tone you can make is to try a different guitar. While you might not have a few different electric guitars around, you probably have a few friends who you could swap with for a week or two.

And so, I changed guitar and played my Peavey Rockingham. Love this guitar.I prefer using it for either modern pop or Jazz. For pop, it sits perfectly in a mix without being overly noticeable. I sadly can’t play rock-a-billy so can’t really use it for what its designed for (sorry Darrel and Peavey!).

You’ll notice the biggest difference is in the studio, where simply changing guitar and keeping the rest the same will inspire you with a completely different sound and feel.

Geek The Base Tone

Try a booster or compressor first in the chain, that’s always switched on. It will fatten your sound and is likely to push the amp into the edge of natural distortion.

If you run a smaller tube amp (15 or 20 watts), then the change will be bigger. You’ll have to readjust your gain based pedals but the overall tone will sound fatter and grittier.

I have used this in the past and have been able to chuck half of my overdrive pedals off my pedalboard. Currently, it doesn’t work as I’m playing on some gigs with a loud drummer and un-mic’d.

I might change my rig back to running two Laney VC15s, which are mic’d. This should give me the volume I need and natural distortion without having to be stadium loud.

Want a more Voxy tone? Then crank the mid control on the amp. If you’re trying to get a more hollow tone for funky single note line – just select both pickups (or the “middle” position on a Strat).

If you wanted a jazzier tone, then turn up the bass and back off the treble control.

More twang? Back off the bass and pump up both the mid and treble controls, while switching to the bridge pick-up.

You’ll want to move your tone control back to the midday and have a more neutral tone.

Cut most of the mids and you’re probably close, boosts the bass and treble a little to shape your guitar tone. The amp’s EQ controls are really powerful and can have an adverse effect if not understood or used correctly.

A word of caution! If you do this on a gig, always remember after the song to flatten or adjust the EQ back to what you started with!

Fingers vs Picks vs Hybrid

A cool way to explore new guitar tones is to drop the pick and use just your fingers. You can also play with a combination of pick and fingers (called hybrid picking).

I’ve been switching between these three picking concepts for a while now. Over time, I’ve worked out how to hide the pick in between fingers (usually between the second and third) and bring it back, into the normal position when I need to use it.

This means I don’t need to drop the pick (and therefore have to hunt for it when I need it later in the song!) or place it in my mouth.

When looking for new guitar tones:

#1 Think about your chain, play around with moving pedals both in and out and where they are in the chain.

#3 Thinking about using a smaller tube amp and setting it on the edge of break-up. You can then use pedals to push the amp into natural distortion which gives you a fuller guitar tone.

#4 Try messing with the amp’s tone control to add depth the style of music you’re playing. Even consider different EQ settings for songs and for each guitar. Just remember to change it back in time for the next song.

#5 Think and experiment with using just fingers. Have a go with using fingers and pick – work on being able to use the three different picking ideas at will.