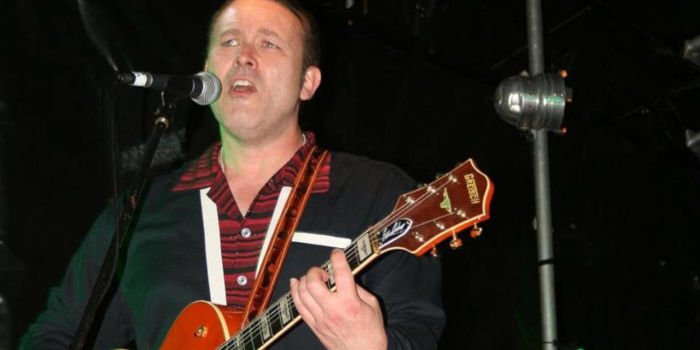 Darrel Higham is known as one of the best Rockabilly guitarists alive today – if not of all time. If you haven’t heard of him, there are loads of clips on YouTube. He’s also constantly touring.

I couldn’t find that much about what Darrel is using guitar-wise. So, that’s why I’ve put this together. While his rig may be simple, his playing style is anything but! Here’s a look at Darrel Higham guitar gear!

I discovered Darrel in around 2006 when I read an interview with him about his then signature guitar, the Peavey Rockingham. I later acquired one. It’s a really great inexpensive guitar. He still has a few Rockingham guitars in his collection.

Among his extensive guitar collection is a Gibson ES-5 Switchmaster guitar with 3 P90 pickups, a Gretsch White Falcon guitar, and a Gibson ES-295. He has a collection of classic guitars we should all envy!

He also has a Gretsch 6120, the same model that Eddie Cochran used. Eddie is one of his key influences. Plus, there’s no guitar like a 6120!

In general, Darrel likes to change the pickups to a P-90 in the neck position, a DeArmond in the bridge, and a fixed arm Bigsby.

Live, his pedalboard only has three pedals on it. There are two Zoom G2, both set up with the same presets. He largely uses a patch with reverb and another with a tremolo sound. He only uses one, with the other being a backup. Also, he uses the tuner on the G2.

The third pedal is a Danelectro Reel Echo, used for a little slapback delay on a few numbers. Powering the pedals is a T-rex Fuel Tank.

Lastly, on top of the amp is an Electro Harmonix Hum Debugger keeping hum to a minimum.

Darrel has a Peavey Delta Blues amp with a 15-inch speaker that has been his go-to live amp of choice for many years. The 15-inch speaker brings the life out of the DeArmond and P-90 pickups a bit more – especially the DeArmond, which can be quite bright.

He also has a new reissue Watkins Dominator in custom red and white, as opposed to the traditional blue and white. To drive the Watkins into a slightly overdriven tone, he uses an original Marshall Bluesbreaker distortion pedal.

For strings, Ernie Ball 10-46 with a wound 18 on the third string, and the usual 2nd string is replaced with a 12. It looks like Darrel uses custom printed medium picks.

Get that Darrel Higham guitar sound

I would describe his tone as a slightly broken-up tube sound which fairly bright with a dash of reverb.

For you to achieve the tone, you’ll need a semi-hollow body guitar. An amp that is set fairly clean with a hint of breakup but not full-on distortion. You’ll then want to add some reverb and have a tremolo pedal ready for slower tunes.

Lastly, you’ll need to work on using a Bigsby to accent notes and chords. It may sound simple, but all in all, Darrel Higham is a complex player with tones to match. As any master, he makes it look and sound easy. But, it’s far from it!

Hope you enjoyed this brief look at Darrel Higham’s guitar gear and sound. I really admire how he plays, and while I can’t play even 1% like him, Darrel is a constant source of inspiration for me.