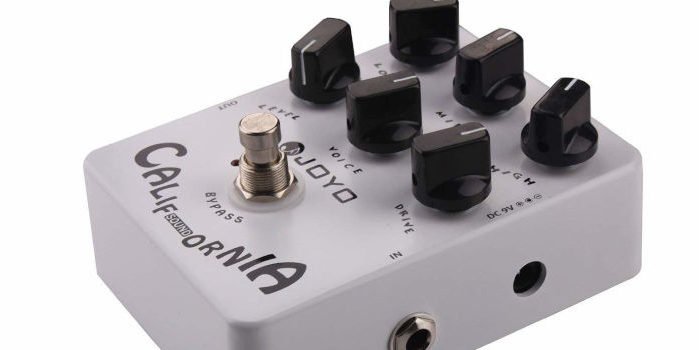 The Joyo California Sound JF-15 Pedal is a complex guitar distortion effect stompbox, reportedly based on a Tech21 pedal of a similar name.

It offers plenty of features and controls, allowing you to dial in a wide range of tones, from a transparent boost to full out over the top fuzz sounds.

For some, the Joyo California will be ultimate overdrive pedal that can replace several dirt pedals. In any case, it’s a versatile pedal that’s affordable and widely available.

When you think of California as a guitar player, two brands usually come to mind: Fender and Mesa Boogie. Both build excellent products, but today we’re focusing on the latter brand.

The Joyo California Sound aims to recreate the famous early Mesa Boogie tones. Think sounds from the Mark IV, for example. If you’ve ever had the privilege of playing through one, you’ll know all the channels are pretty special and cover a wide tonal spectrum.

You might see this pedal under the Harley Benton name as super music retailer Thomann sells a rebranded version. Regardless of the brand on the box, this pedal provides a massive range of distortion tones.

While the market is full of distortion pedals, few emulate a classic amp. Imagine being on a gig where you can’t use your own amp. You can use the California pedal as an EQ boost and transform a dull-sounding amp into an inspiring tone.

The pedal provides a range of distortion sounds, from classic blues breakup to over-the-top fuzz and everything in between.

Thanks to its range of controls, the Joyo California Sound is a really versatile guitar effects pedal. Way better than the JOYO Ultimate Overdrive Pedal, which I’ve also reviewed.

Also, it’s ideal for recording, as you can plug it directly into any DAW, and it sounds pretty good.

Overall the Joyo California Sound is a well-constructed pedal with the two jack sockets screwed to the case and not molded jacks on the PCB, which will increase the life of this Joyo pedal.

The power socket is PCB mounted and isn’t fixed to the case. Also, it’s on the side of the pedal, which is a little annoying.

The LED is located next to the foot switch, which again, is annoying. Luckily, the LED is super bright and really easy to see on stage, despite its weird location.

The battery compartment is easy to access and uses a plastic door on the bottom of the pedal. So, you can use the pedal in several situations without any issues. 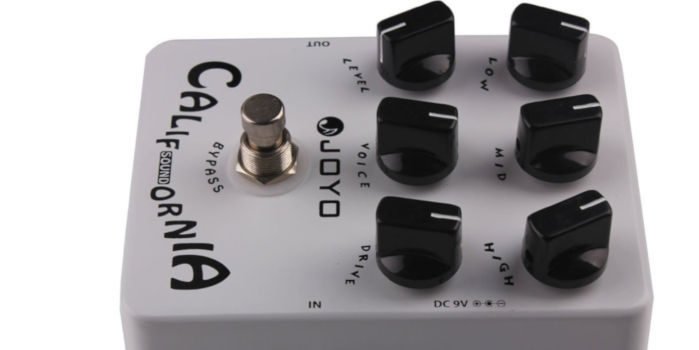 There are a lot of controls on the Joyo California Sound. So, let’s start with a quick overview of each knob. After a little experimenting, you’ll easily find many tones you’ll love and want to use.

The top row contains a three-band EQ: Bass, Mid, High. Pretty standard and simple to understand. So far, so good! Each of these knobs has a wide range, making it possible to easily shape your guitar’s tone, no matter the situation.

On the second row is a Level control, which is the pedal’s overall volume. Again, nothing too surprising here!

Next is the Voice control, which is where things get interesting. Using this knob changes both the gain structure and the EQ as you move it. So, you can completely change the distortion sound by adjusting this control.

A Drive control completes the second row and allows you to add more or less distortion to your guitar sound. Working in partnership with the Voice control, you can get a range of overdriven tones by adjusting these two controls and keeping the EQ controls at 12.

Also, the Joyo California is a true bypass pedal, which is a nice bonus and ensures you have a cleaner signal path.

Let’s start with boost sounds. If you just want to shape your overall EQ keep the Voice and Drive controls down low and adjust the Joyo California Sound’s 3 EQ and Level controls to suit.

For a mid-range honky boost, keep the Voice and Drive low and roll back the Bass and Treble control. Next, turn the Mids knob on full.

If you want a tube screamer-type tone, keep the above settings and increase the Drive control.

With plenty of volume available, you can use it as a clean boost. Plus, you’ll find you have more than enough volume lift for every situation.

In terms of distortion tones, tweaking the Voice control changes the core sound of the pedal and can provide a range of usable tones. Yes, this single control is that powerful. But watch out, as increasing this control can make the pedal noisy.

The EQ on the pedal is just as reactive as the Voice control and allows you to go from bluesy overdrive to scooped metalish tone by simply backing the Mid EQ control down.

It’s worth pointing out that the bass control provides about 4 times the amount of low-end you’ll ever need. That said, the Mid and Hi controls are far more useable. So, you’ll need to play with the pedal’s EQ controls to fully understand how they work.

Of course, you’ll need to keep tweaking until you find what guitar tones work for you. But, this pedal has a wide range of tones on tap.

Having owned this pedal for about 2 years, I’ve used it on gigs, for teaching, and have also sold a few to students. To my ears, it’s one of the most versatile distortion effect pedals I’ve played or used.

While it can get quite noisy, I highly recommend you buy one! And some tweaking, the Joyo California Sound pedal has replaced my RAT on the pedalboard.

The best tip I can give to get your head around how versatile this pedal is to set the EQ controls at 12 o’clock. Next, set the Gain and the Level controls around 10 o’clock. The result is a nice overdrive tone. I’d suggest playing the Voice control to see how the pedal changes as this knob is moved.

Considering how affordable the Joyo California Sound Effects pedal is, I’d rush out and get one, even if it’s just to see what all the hype is about!