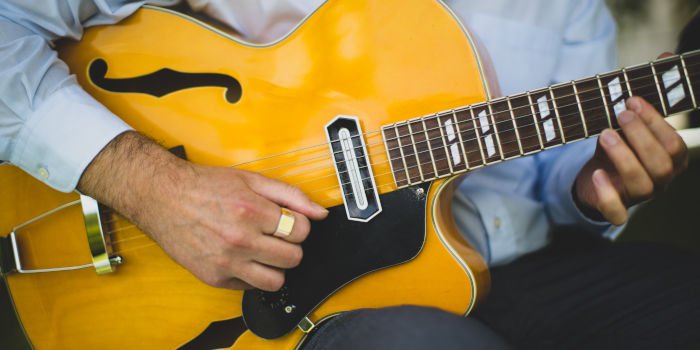 If a lack of knowledge or previous failure stops you from learning to play jazz guitar, you’ll want to listen up. The good news is there are only 5 jazz guitar basics you need to learn.

After putting countless hours into learning the guitar, I have enough information to write a book (oh wait, I’ve written 30!). As typical with musicians, I’ve borrowed a load of chords, licks, patterns, etc. – or should that be stolen!

So, in honor of all the people who’ve done the hard work for me, here is the simplest way to explore jazz guitar basics. In a rare step, I’ve tried to credit who I took the idea from.

None of these jazz guitar basics are new but collecting them into a single place is. We’ll deal with the two components: Chords and Solos. Let’s start with Chords!

He included diminished and augmented chords in the dominant chord family. His reason was that we usually use diminished sevenths or augmented sevenths. Both types of chords have a kind of flat 7.

If we jump in and have a quick look at some basic jazz guitar chords, we get:

While far from a complete list of chords or even guitar voicings, these cover all you need to know to get started. They will allow you to enjoy playing the majority of jazz standards. Think songs like ‘Fly Me to the Moon,’ ‘All of me,’ ‘Blue Bossa,’ ‘Kind of blue,’ ‘Girl from Ipanema’, etc.

If you don’t know many of these chord voicings, treat yourself to a copy of my Essential Jazz Guitar Chords eBook. This book covers all of the jazz guitar chords you’ll ever need.

Everyone starts by playing full chords and trying to swing them! In most band situations, you only want to play a few notes and stick to your own lane.

So, over time you’ll want to move away from using full chords and learn some partial chords (start with my ebook!) to give the piano player and bassist space to shine.

Piano players are a great source of ideas when learning how to play behind the soloist. So, it’s worth listening to and analyzing as many as possible. Try your best to borrow their lines, chord movements, and ideas.

It might take a while for you to incorporate their ideas into your playing. But it’ll be totally worth the effort. The best place to start is with arpeggios. They are easy to play and memorize. Also, if you swing them, you’ll sound like you’re halfway there to faking a jazz guitar solo!

When you’re comfortable with arpeggios, don’t think about scales. Instead, sing melodies. I’ve said this a thousand times. No one wants to listen to you play scales (however incredible you might be at them!). They want to hear something melodic which moves them.

Once those arpeggios are happening, you might want to use some scales. Here are Emily Remler‘s general scale rules that work quite nicely.

Use the Major scale over the I, IIm, IIIm, IV, and VIm chords. It’s simple and sounds great. You can use it to resolve any tension super-imposed on the V chord.

For any dominant chord that isn’t resolving (i.e. going back to the I chord), play the jazz minor scale up a 5th from the chord you start on. The jazz minor scale is a major scale with the third note lowered by a half step. Easy!

However, if the dominant IS going home (V to I chord movement), play the jazz minor scale a half step above the dominant chord.

Struggling to know where to start?

If this all seems too complex, take one new scale and work on that. After a few attempts, you should get it. It will seem quite simple while sounding beautiful.

Record your own backing

Another soloing tip from Emily Remler is to play over simple homemade rhythm tracks. She used to tape record (remember this was the 80s!) herself playing the chord changes with a metronome on 2 and 4. Next, she’d play the tape back and try to solo over the changes.

If she couldn’t find a lick to play or messed up over a certain chord change, she would stop the tape. She would then figure out what she should play and rehearse the lick 15 to 20 times until she could play it confidently.

Not only did her timing improve this way, but she also became a great soloist. Use this method to improve your playing regardless of the style. 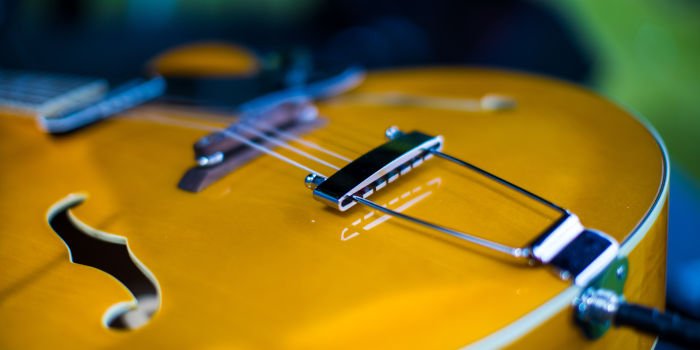 It’s about that swing

One of the most important jazz guitar basics to master is getting everything to swing! The easiest way to make music swing is to practice with the metronome on 2 and 4. While this is very difficult to start with, it will do wonders for your playing and timekeeping.

Set your metronome on the slowest setting, which is usually 40 BPM. Instead of counting each click as a beat, we will only count beats 2 and 4 with clicks. So, the gaps in between the click will be either beat 1 or 3.

If you’re a rock musician, it’ll feel odd. You’ll be used to the strong beats being 1 and 3 – not 2 and 4. Our actual tempo is double what the metronome tempo is. We’re, therefore, playing at 80 BPM.

Start by counting out loud ‘2’ and ‘4’ in time with the clicks. When you feel confident, try to add in ‘1’ and ‘3’ into the spaces. After a while, you’ll get comfortable with this. Next, try to play something simple like the chords to the song ‘Blue Bossa’.

A final tip when learning jazz guitar basics is to take it slowly. First, get the chords down and then learn some arpeggios. Finally, move on to adding some of your own licks.

Build your jazz guitar playing solidly from the start. If you don’t, you’ll struggle to advance or spend way too long learning the basics.

Remember, Jazz doesn’t have to be complex. You can break it down into simple building blocks that you can master. I hope you enjoyed this quick look at jazz guitar basics.