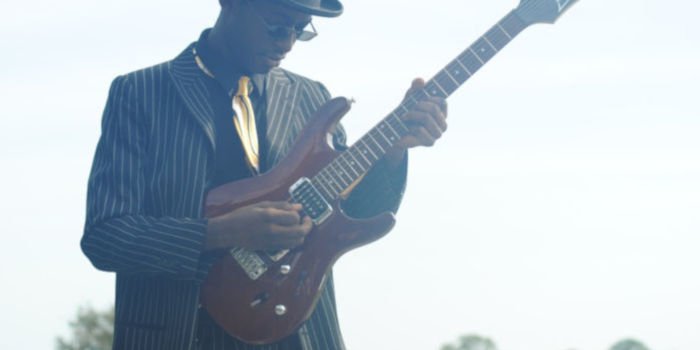 String bending is quite tricky, especially if you use more than one guitar as each guitar bends differently. Let’s look at 5 simple guitar string bending exercises. All will enable you to improve your skills right away.

#1 The basics of bending

Bending a string is a bit like twisting a knob, you simply pivot on a point. Place your thumb over the top of the guitar’s neck and use your first finger to create the pivot point. Do not push your fingers up as you’re likely to do damage and won’t have enough strength to execute the bend properly.

This is the easiest of all bends to get under your hands. Sometimes called a blues curl, a quarter-tone bend is slightly pulling the string in either direction. You just want to tweak the string, so that’s a slightly sharp.

Next, we get into playable intervals. A half step bend is the same as playing the next fret up. Try this, play the A note at the 10th fret on the B string. Now, play the 11th fret (which is Bb). Hum that pitch.

You won’t find the correct pitch the first time but wiggle your hand until what you are playing matches the note which you are humming.

If a half step bend is the same as playing the next fret up, then a full step bend is like playing two frets up. So using the same idea as above, start with our A note (B string, 10th fret), then play the 12th fret (B note).

Bend again using your third finger on the 10th fret supported by the other two fingers. Remember to hum the pitch you are trying to reach and try to match it the first time.

This is like playing a note three frets away from the starting note. Again starting on the 10th fret, the note we’re trying to bend to is the 13 fret or C. Now, the other bends are fairly easy, and reaching a minor third bend will be easier higher up on the fretboard and with lighter strings.

It will take some work to get this particular bend right.

As you know understand the common bends, let’s looks a few guitar string bending exercises! Firstly, sing the note you’re trying to reach. Did your bend hit it the first time?

If not, slow the bend down and work on that bend in isolation. Really listen to how you bend, are you slow to reach pitch? Do you over-bend? Are you trying to hear the target note in your head first? Is your bending technique right?

So, you’ve improved your bending in one location, and on one string. That’s great news! What you now need to work on is bending in different positions. How you bend is unique to each string and location. And even to guitars.

It will require more effort to bend efficiently on thicker strings, like the G or D or lower down the fretboard, closer to the nut. As you get past the 12th fret, bending is easier.

However, as this is the case, it’s likely you’ll over bend as you’ll try to use the same amount of effort all over the fretboard rather than adjusting to the position.

So, we’ve worked on a few guitar string bending exercises. You should notice a difference when bending in isolation. If you now try it in a lick, it’s likely to go wrong. Oh no!

Firstly, we’ll find a lick with the bend at the end. Then, we’ll start painfully slowly, ensuring that we have each note of the phrase under our fingers.

When we get to bend, we’ll try and sing the pitch we’re trying to bend to. Again, start slow, getting the phrase right and bending the last note up to pitch.

When you’ve got it together at a slow pace, it’s time to dig out a metronome (I recommend the Korg TM60BK Tuner Metronome – $23 at Amazon). Work on perfecting the bend and timing, while increasing the speed.

As different guitars have their own scale length and string gauge, each guitar bends in its own way. Bending a heavy string on a shorter scale will require more work than bending a lighter string on a longer scale length.

Therefore, its worth spending time before gigs playing each guitar you’ll use and learning how that guitar bends. If you’re unsure, bend under and add shallow vibrato whilst moving the string to the correct pitch.

Getting your vibrato right is half the battle. While finding pitch gets easier over time, using the wrong type of vibrato will make you sound bad. And we don’t want that, do we?!

Most players will only ever use shallow bluesy vibrato when bending. All this means is shaking the string slightly up and down around the pitch. However, you can be really aggressive and wide with vibrato, especially if you’re playing harder rock or metal.

So there you have a few simple guitar string bending exercises. What your favourite bend?