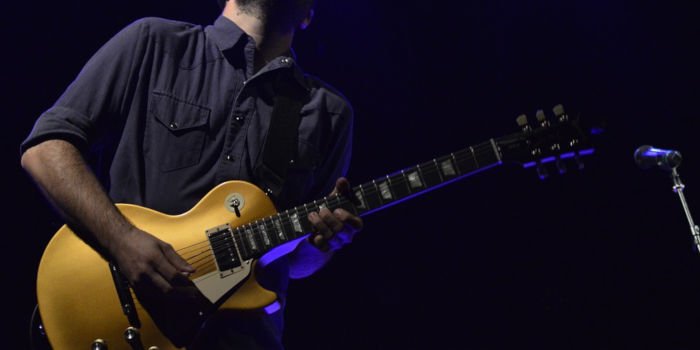 Learning how to solo is difficult. Sadly, I believe most guitar teachers do a fairly bad job of teaching soloing. Luckily for you, I’ve written this introduction to guitar soloing basics to help you get started.

Typically you’ll start with pentatonic scales. After months of running different scale shapes, you’ll have them under your hands. Hopefully, your guitar teacher is full of praise during this difficult time.

However, even after months of practicing scales, you’ll feel frustrated as you can’t solo yet. I get it, it’s annoying. Not all hope is lost tho!

I’m going to show you some really simple methods to help you master the basics of guitar soloing. So, let’s get started with this introduction to guitar soloing basics!

Old Method For Learning How To Solo On Guitar

Let’s start with the usual method of learning how to create basic guitar solos. We’ll learn some scales across the guitar’s fretboard. Usually, you’ll start with the pentatonic scale.

Once you’ve mastered the 5 pentatonic shapes, it’s time to learn an exotic scale or two. Exciting!

Instead of learning how to use them musically, we’ll keep learning more scales!

If this sounds like how you were taught guitar soloing basics, it’s understandable if you’re frustrated. I know I was irritated for many years following this and similar methods.

It’s like you’re trying to learn to ride a bike by watching YouTube clips. You’ll quickly wonder why you keep falling off!

While scales are important, having something to say is far more valuable. 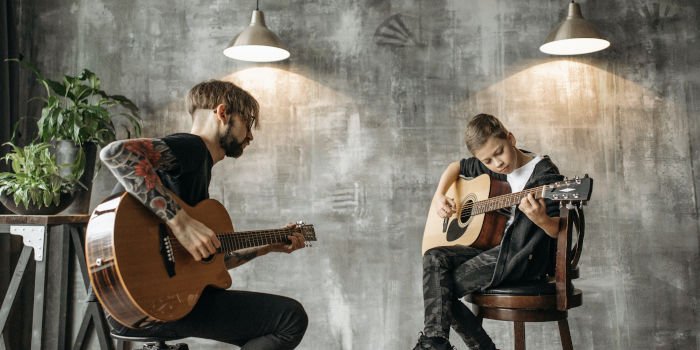 Now, this will sound like I am contradicting myself. But, you should learn the 5 pentatonic minor scale shapes. They are a fantastic foundation and starting point. . If you don’t know them, you should buy my scales ebook.

Each scale is displayed across the whole fretboard. The ebook also shows each scale shape. So with some work, you’ll be able to play scales across and understand the notes in the scale better.

Learn each scale one shape at a time and use a metronome to ensure consistency and accuracy. I recommend the Korg TM60BK, which is highly affordable and is also a tuner!

How To Learn Scale Shapes

How to learn scale shapes Don’t try to get through the 5 scale shapes quickly and move on to something more exciting. Instead, take your time and really listen to each note. Get them even, full-sounding, and without any buzzes.

You can mostly stick strictly to one finger per fret. Using this system, you build efficiency from the start and make it easy to play through each shape, quickly. Again, start slow and build speed over time. 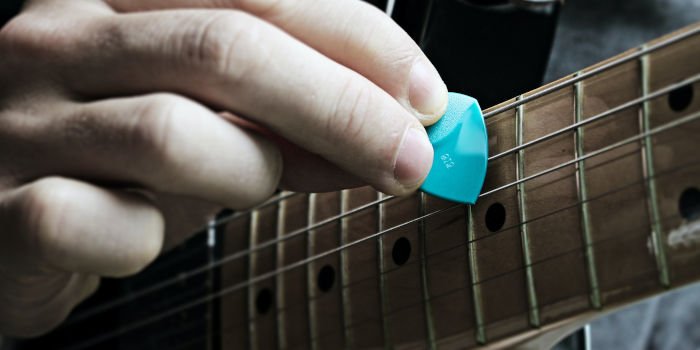 Once Cracked, Limit Yourself!

Your first challenge is to learn each shape in time, in tune, and make it sound melodic. If you’re rushing or it sounds like an exercise, you’ve still got some way to go.

When you’re confident it sounds great, pick 4 notes from the scale shape. You could pick two strings next to each other or pick two with a gap in the middle.

Why four? A few reasons. Firstly, you’re using a small area. There’s only a certain number of ideas available. Also, you can’t get lost as you only have four notes!

Before you can start soloing with your four notes, you’ll want to find a simple song in a single key. You could turn on the radio as it’s full of simple pop tunes. Playing along with these hits makes it easier to try our guitar soloing basics.

With our song, the idea is to find the key and start experimenting. Before you call me crazy, you can do a lot with 4 simple notes. All you need is to be creative! So, what are some ideas?

We could bend notes, slide up or down, stick on one note and play with the rhythmic element. However, we could leave space and play two notes. How about question and answer? Try to keep to the same question each time but change the answer.

These are just a few ways for you to explore the basics of guitar soloing.

Pro Tip: How to bend strings in tune – every time!


With string bending, please get it in tune! Sounds simple, but is actually, difficult.

Here’s how to improve your bending. Play the target note and sing it out loud. Move into position and get ready to bend. As you bend the string, keep singing the note.

After a few times, you’ll start feeling where “in tune” is. Within a few weeks, it will become natural for you to hit pitch – quickly, easily, and with style!

When you’ve used up all of your guitar soloing ideas, try them again! By forcing yourself to use the same ideas, you’ll have to start experimenting.

If you’re stuck, here are some ideas. How about playing with the timing of your favorite lick? Play another backwards. Mix two to create a new phrase. Try a tired-sounding lick with a different rhythm.

When you feel you’ve played all you can, pick a new set of 4 notes from that scale shape. Try all the basic ideas we’ve talked about above. Remember, you can bend, slide, write motifs, try Q+A, and more!

Keep moving on! Continue by picking a different 4 notes until you’ve worked through that scale shape and used up all the possible combinations you think you can. 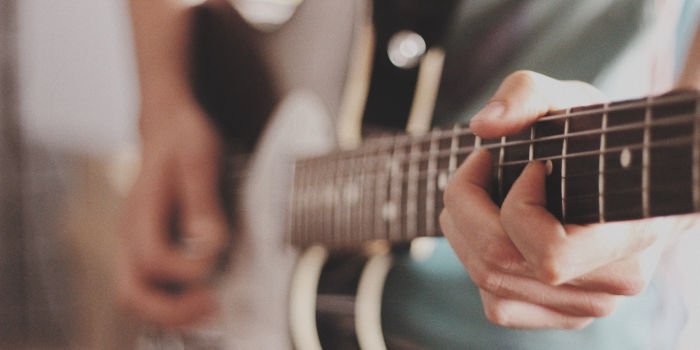 Pro Tip: A note about phrasing

Phrasing is a lot like the way we speak. Do you notice you speed up when you’re excited? Or how you add extra pauses when you’re trying to drive the point home.

Phrasing is also the gaps we leave between sentences and the pause after we’ve asked a question. We probably raised our pitch as we came to the final word! Did we?

That is what phrasing is. It’s not talking all the time with the odd grasping for breath, nor is it monotone lengthy sentences with no form or structure which make the listener believe you, the one talking is bored.

After experimenting with a few different 4 note sets, you can try using whole scale shapes. You could pick two sets of four notes across two scale shapes.

By joining any two groups together, you’ve created loads of possibilities. These include being to create movement within your solos by moving position.

As you have space to move, don’t hog one string or a single shape. Instead, look for melodic passages which travel through both shapes. Again experiment with as many ideas as possible.

Remember to keep working on your bending and phrasing. Try to record or write down your ideas.

If you’ve followed some of these guitar soloing basics, you’ll already see an improvement. Plus, you’ll have a better understanding of how to learn scales quicker and how to find your own licks.

Over time you’ll refine these ideas into your own unique voice. While this is just the start of guitar soloing basics, and it will take time for you to develop enough to solo effectively, you’re on the right path.