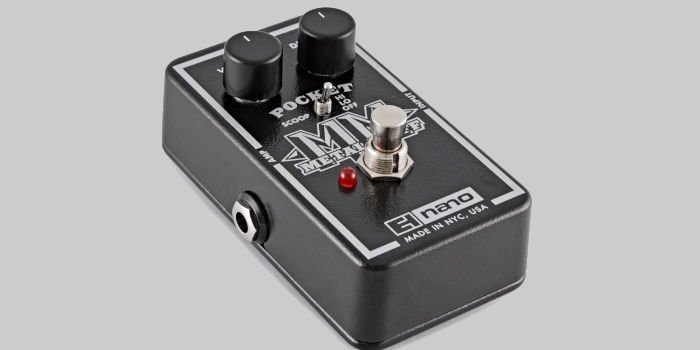 Don’t be fooled by the metal label, as this pedal can produce a range of fuzz tones for many different musical styles. If you’re looking for a new overdrive or distortion pedal that’s different, this could fit the bill.

Unlike many of the pedal reviews I’ve written, the Electro Harmonix Pocket Metal Muff Distortion Pedal is an adaptation or if you will an extension of an existing classic pedal. It’s not a clone! Such a relief!

While billed as a guitar effect pedal for metal, I found it useful for a range of overdrive and fuzz tones, which really surprised me. It seems that EHX has done a great job of creating a pedal that useful for pop, rock, and metal. 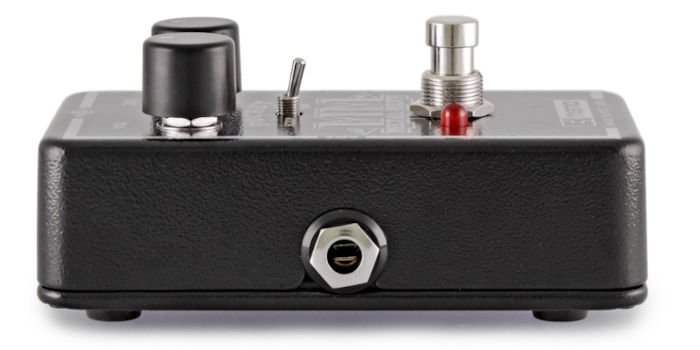 One thing is for sure, Electro Harmonix knows how to build pedals that will last and can produce a range of musical sounds.

From the tough black powder-coated metal case to the jack sockets to the knobs, everything has been chosen to ensure that the pedal lasts forever and can handle the abuse of gigging.

I’m pretty sure you could drop any EHX pedal from a tall building or run over it in a car, and it’ll still work perfectly! Not, that I suggest you do either! But the build quality is legendary.

Looking at the pedal, you’ll see input and output jacks, and a footswitch. You can power this pedal by either a 9-volt DC power supply or using a battery. Beware, to change the battery, you’ll need a screwdriver to remove the back plate.

The red LED is bright, so easy to view on stage. However, I’m not a big fan of placing the LED next to the footswitch. You’ll likely cover it when turning the pedal on/off. So the Electro Harmonix Pocket Metal Muff loses a point for this.

In terms of controls, you have a Volume control, Distortion control, and 3-way scoop frequencies switch.

While the volume and distortion controls are somewhat self-explanatory, the switch isn’t. The first position is off, and so is just the basic sound of the pedal.

Hopefully, you have a taste of just how versatile this Electro Harmonix Pocket Metal Muff Distortion Pedal is and how it can produce a range of distortion tones for all kinds of music. 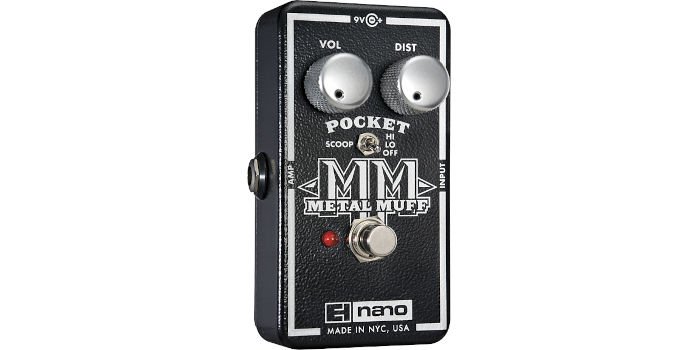 I found the distortion control has a massive range, which when kept low with the mid switch in the off position, gives a really nice clean boost. Ideal for those times when you want a little more volume but no added distortion.

As you turn up the distortion knob, it’s quite amp-like in its break up, while still not in the metal territory. It easily provides an alternative to TS-style pedals and is a unique-sounding overdrive.

You can color the sound further with the mid switch, which starts to push the pedal into high-gain sounds by shaping the distortion tone. We’re now into distortion sounds that are musical yet punchy. But still not fuzz tones!

Overall, there’s a lot of gain on tap. The mid switch on this pedal allows it to be musical and usable in every setting. As a versatile pedal, it’s not just for modern rock or fuzz tones.

You can find many useful sounds by experimenting and tweaking the knobs. Even playing with the switch gives you a range of different guitar tones to try and use.

And of course, you can turn the controls all and click the switch to the third position for an all-out scooped metal guitar tone!

Overall, I like this EHX pedal. However, the tone switch means you really have to love how the pedal sounds as you have no control over shaping the tone of the guitar’s sound. Some will love it, while others will hate it.

With that said, I was quite surprised that for a metal-type distortion pedal, how little gain it has on lower gain settings. To my ears, this makes the pedal great as it can cover bluesy to high-gain tones.

If you’re looking for a distortion pedal with a ton of personality, check out the Electro Harmonix Pocket Metal Muff Distortion Pedal. It’s highly versatile and has a small footprint. Plus, it’s not another Tube Screamer-style pedal!