The Dunlop 535Q Cry Baby® Multi-Wah is a standard Cry Baby Wah on acid. If you think the Wah Wah was perfect the first time, think again! This pedal is next-level stuff, yet is still highly affordable.

Dunlop has taken the classic Cry Baby® we’ve all heard on countless songs and added a few new features which make the 535Q more versatile. These include a boost and multi-position tone switch.

The result is a Wah Wah pedal that’s built for the modern world, whether you’re recording, performing live, or jamming in a garage! It could be the last Wah pedal you’ll ever buy! Let’s jump in!

Traditionally the Wah pedal simply had an input, output, power input, and a treadmill, which you rock back and forth to produce different vowel sounds.

The 535Q Cry Baby Multi-Wah takes this to the next level with an adjustable boost and two voice selector control knobs. Together these features create a versatile pedal.

The adjustable boost can be switched on/off using the red button on the right-side hand at the bottom of the pedal. Its volume control sits on the left-hand side and offers a + 16 dB volume boost.

Below the boost’s volume control is a Variable Q control, which allows you to fine tune the width of the 535Q’s bandpass and customize the Wah’s sound even further.

A six-position voice selector switch on the right-hand side of the pedal allows you to fine-tune the Wah’s sound from narrow and dark to broad and subtle.

These two additional features create plenty of tone-shaping opportunities, allowing you to easily adjust the Wah’s sound to the guitar, amp, or song.

If you know anything about Dunlop or MXR (brands of the same company), you’ll know they build solid pedals that will survive years of abuse. It’s one reason you’ll see so many professionals using their gear.

It all feels and looks great, from the metal enclosure to the plastic battery door underneath. Plus, the recessed input and output jacks, and power sockets add to the top build quality.

This Jim Dunlop 535Q Cry Baby Wah Wah Pedal will easily survive for 20-plus years without showing much wear. 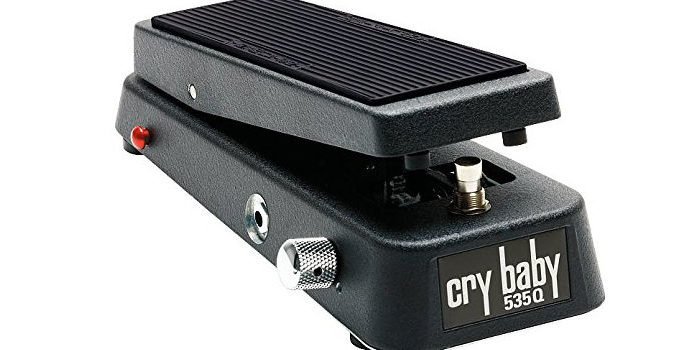 Unsurprising, the main control is the rocker on top, which controls the effect. Underneath the rocker is a footswitch that allows you to turn the pedal on or off.

You can tune the Wah’s sweep with the 6-position switch, which allows you to voice the Wah exactly how you like it. Further refine the pedal’s voicing by using the VARIABLE Q knob, which controls the width of the GCB535Q’s bandpass.

The boost function has an impressive +16db of gain and is switched in/out by the red footswitch on the right side of the Wah pedal. So, you can easily be louder when using the Wah, ideal for solos.

The 535Q can be powered in two ways, either by battery. A battery compartment is easily accessed via the plastic door on the bottom. You could power the pedal using a standard 9-volt DC center negative power supply.

Firstly, being able to voice the Wah to the guitar, song, or situation is really useful. If your guitar is bright, selecting the 4th, 5th, or 6th position on the voicing switch will mellow it.

Conversely, if you need to cut through select positions 1st, 2nd, or 3rd for a maximum sweep. If in doubt, test a few different positions and find one that works for you.

You can further tune the sound of the pedal by rotating the VARIABLE Q knob clockwise. Doing so will provide a narrower bandpass and emphasize higher-end harmonics.

Moving the Q knob counter-clockwise, the Wah will have a wider bandpass that emphasizes lower-end harmonics.

The 16db gain boost enables you to drive the signal chain harder or to hit the front end of the amp hard, thus driving the amp into natural distortion. And while can’t be used independently, it still provides a useful function.

The current version on the market is slightly different from the 535Q wah I have. My version 1 has status LEDs for when the pedal is engaged (green) and the boost is on (red).

For some reason, the current version doesn’t have these LEDs. Instead it has the Q knob. I don’t get why you can’t have both features, especially as the LEDs make the pedal even more useful.

If you have the standard Cry Baby® or don’t yet have a Wah, then you need to check out the Dunlop 535Q Cry Baby® Multi-Wah.