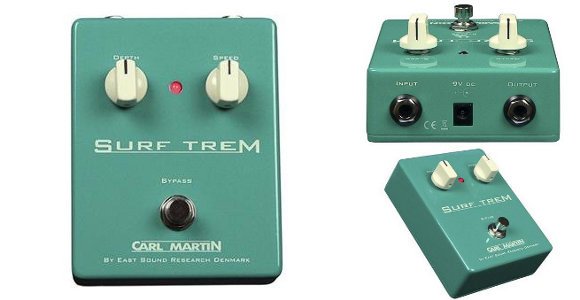 Inspired by classic amp tremolos of the 50s and 60s, the Carl Martin Surf Tremolo Pedal is an FX pedal that delivers a range of subtle tones. I had a first version pedal, which has an unusual shaped case and stole a lot of pedalboard space.

Thankfully Carl Martin saw sense and released it in a smaller, more pedalboard-friendly package. However, the circuit is the same, which is the important thing.

Let’s have an in-depth look at the Carl Martin Surf Tremolo.

The idea for the Surf Tremolo was to recreate the classic tremolo sound of the 50s and 60s often found in tube amps. These classic amps produced a subtle tremolo, that was easy on the ears and perfect for ballads – think of Wes Montgomery.

Yes, this pedal musically swooshes in a very Fenderish way. It’s not designed for hard tremolo sounds but does create some really musically pleasing tones.

Carl Martin wanted the pedal to sound authentic, so they build an amp with the tremolo circuit in it. Then, they tried to model the pedal’s input so that it behaved like the input of an old tube amp, thus faithfully recreating the sound.

You no longer need a vintage tube amp that offers a tremolo channel, with all of the issues that come with them when this pedal can do it. 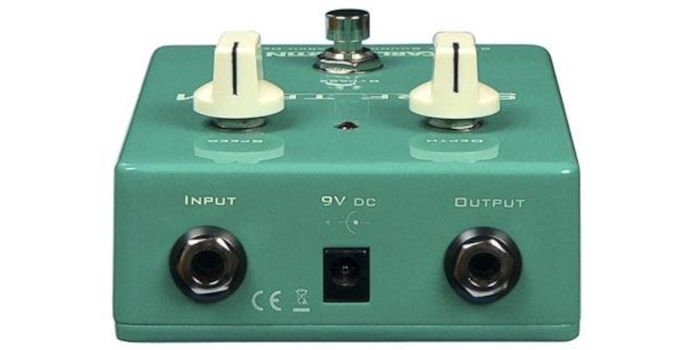 Carl Martin are well known for their excellent build quality and even though this pedal is one of their cheapest, the build is just as high as other pedals in the range.

The metal seafoam green case is attractive and hard-wearing. It’s designed to last and withstand a lot of abuse.

The input and output jacks are on the top, which some guitarists prefer and are screwed to the case. The power input is also on top but isn’t fixed to the case.

The battery compartment is, sadly, well hidden. You have to remove the base plate to gain access, which isn’t user-friendly at all. Hence, I knocked a few marks off.

While the pedal does not have true bypass, the buffer doesn’t add anything nasty to the sound. And as you might use the Surf Term last in the chain, having a buffer at this point is perfect to maintain sound quality over long cable runs back to the amp.

The footswitch is easy to use without knocking any settings and the LED is very bright. 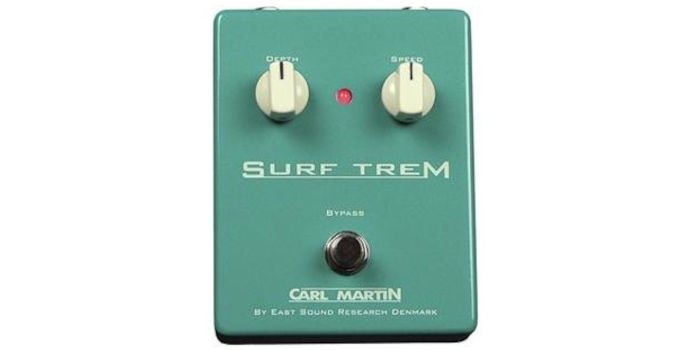 The pedal has a really musical sound and offers a range of subtle tremolo sounds. While it doesn’t do over-the-top hard wave choppy tremolo sound, every setting is pleasing, and the rate control has a wide range.

My favorite thing to do with tremolo pedals is start with all controls at 12. This setting produces a middle-of-the-road kind of tone, which is useable for most situations. I’d then tweak the rate control to match the song’s vibe.

If you’re looking for an aggressive hard wave tremolo sound, frankly the Carl Martin Surf Tremolo Pedal isn’t for you. Both Boss and Nobles offer tremolo pedals that are probably more suitable for you.

It’s a compact FX pedal that’s easy to use and has plenty of useable tones. It’s not the fanciest tremolo pedal. True. However, it’s a superb FX that you’ll either love or hate.