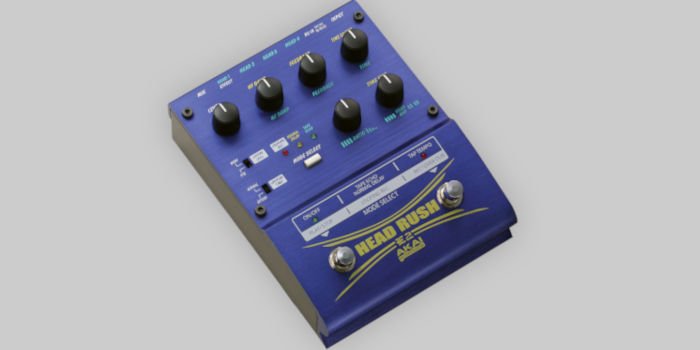 The Akai Professional E2 Headrush Delay/Looper Pedal is a really complex yet cool device. It offers two different delay sounds and a built-in looper. Highly flexible thanks to its mass of controls control and 5 outputs!

The delay sounds are superb, ideal if you’re looking for something more analog-sounding yet with the flexibility of tap tempo. The looper function offers unlimited overdubs and up to 24 seconds of recording time.

Made famous by KT Tunstall and others, the Akai Headrush is quite affordable, especially for the number of features you get. I’ve had one for a while now on my gig pedalboard and love it!

The digital delay sound has a rich, almost lo-fi sound, especially if you keep the HF Damp control low. It’s ideal for everything from country slapback to longer ambient tones and offers up to 24 seconds of delay.

The tape echo setting simulates a four-head analog-tape machine with a maxiumum delay time of 6 seconds. You can either sum these to one output or control each virtual head by a separate output, hence the 5 output jacks.

The looper function allows you to record a phrase or chord pattern, then record and play over the top of this first loop. The looper has a max record time of 23.8 seconds! That’s very long! 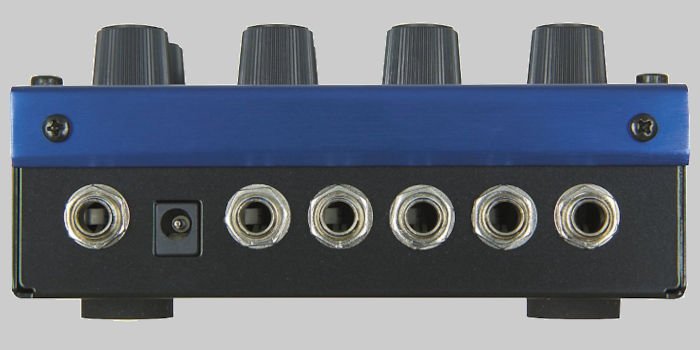 The Headrush is extremely well-built thanks to its metal case. The large knobs enable the pedal’s settings to be seen on stage easily. The input and multiple output jacks are screwed in, ensuring ensures longevity.

The DC power input is PCB mounted, which is a shame but is easy to access as it sits next to the input. Putting that to one side, it’s built like a tank and would withstand a lot of abuse.

At 14 x 18 x 6 cm and over 1.1kg, it’s a large pedal. However, regardless of the size, the sounds and features onboard make it worth the pedalboard space it will need.

There are plenty of controls on the Akai Professional E2 Headrush pedal. So, it might take some time to understand what each does. But here’s a brief look.

The second starts with two switches: Looping Level (fixed/variable), and Looping Time (normal/extended). Next is a Mode switch that allows you to select between looping, delay, and tape echo. The LED above this switch display the mode.

And the last two controls on the second row are Ratio (only used in tape echo to adjust between 1 and 4 virtual heads) and Head gap (fine time adjustment in normal delay mode/in tape mode it adjusts the position of the heads/not used in looper mode).

Depending on the mode, the pedal’s two footswitches activate different functions.

In either delay mode, the left acts as an on/off, and the right footswitch allows you to tap in the tempo. As you use this tap tempo feature, you’ll notice one of the LED flashes in time with you.

Switching to looper mode, the left footswitch is on/off. The right controls the record and overdub function.

In tape echo mode, you can use the 5 outputs. Switching to either the digital delay or looper mode sums the signal to the mix output.

Despite the Akai Headrush’s many controls, getting a good delay sound is fairly simple, out of the box. The Level control acts more as wet/dry mix than providing a boost, as some delays do.

I’ve found it easy to set up a basic 8th note delay using the normal delay mode, which is useful for most things.

By adjusting the Ratio control, which is only usable on the tape echo mode, you can get a dotted 8th note delay sound – that famed U2 sound.

These two delay settings allow me to cover most delay sounds I need on gigs. Plus, it’s easy to hit the mode switch to change the delay settings during a gig.

Of course, I use the tap tempo to adjust the delay time rather than trying to dial in the right setting for the song’s tempo. I believe that most digital delays should have an easy-to-use tap tempo control or option.

The looper function is very cool. It allows you to record a simple chord pattern and then either build layers on top or use it as a practice tool. In this mode, you can select from normal or extended looping time.

Also, thanks to the looping level switch, you can have more control over your recordings. Use the fixed position to enable the pedal to compress your guitar sound so that each loop is roughly the same volume.

You could, however, switch to the variable position and let it record different volume levels for a natural and raw sound.

I’ve used the Akai Professional E2 Headrush for a few years now on my smaller gigging pedalboard. And while I don’t use the looper function on gigs, I do use the two delay settings.

I don’t like a few things about it. Firstly, the size, it’s huge! If you’re like me you need a small pedalboard that covers a lot of ground. So, you want to use a few small but versatile pedals.

That said, it sounds good and is quite easy to understand after some experimenting.

The other thing I dislike is the looper, which I have to confess I’ve only used for practice – you can’t store loops. That’s fine if you’re using it like KT Tunstall but not if you want to record and recall.

While this works for my current gigging needs, I might replace it with a BOSS DD-20 or TC Electronic Nova delay or something else. That said, I do recommend it!