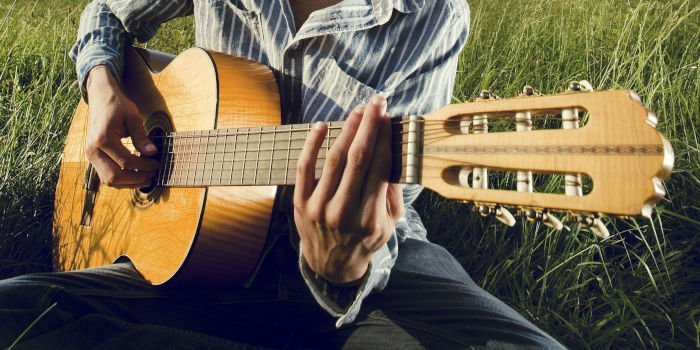 Now and again I get a brand new student. Not just new to me but new to the guitar. They can’t play anything but are excited to learn how to play and are filled with blind enthusiasm!

Although this first guitar lesson is usually impossibly hard to teach, it’s actually my favourite lesson for many reasons. My favourite reason is they have no bad habits!

I can spend the time working on building a strong foundation rather than having to correct any bad habits they might have!

Secondly, I love just the idea of teaching something so exciting to someone so fresh.

There are literately a million and one different ways to teach the first lesson, not one of them is correct nor is there one right way to start to explore and learn guitar. Surely that’s really exciting within itself! Plus this is what makes it difficult for me as the teacher! Where do I start?!

Before I share a rough outline of what I cover in the first guitar lesson, I should tell you about mine – hey it’s only fair!

While I don’t remember what I learnt in my first guitar lesson, I do hazily remember the overall details involved. Luckily for me, the head teacher at my first school played the guitar.

Even though it was a long time ago, I remember him being quite good. He taught guitar from the old school hall on a Friday lunchtime to kids aged 10 and above (the last two year groups at that school). Sadly he was headhunted and moved on when my year did. I would have been really annoyed if I was in the year below!

I remember the build-up of anticipation and excitement on Friday mornings, culminating in the downing of lunch. I’m not a fast eater but lunch on a Friday was gone straight away! Then I’d beg to be released from the lunchroom far-earlier than they should have in order to go to the music room.

It would then take what felt like a lifetime to tune the 10 or so guitars. Just imagine that for a minute or two! Painful right?!

That’s all I remember, sadly. However, I guess we learnt simple things like a few open chords, a basic song or two, or a popular modern hymn from that week’s assembly. Again something simple and easily learnt!

The only thing I remember is being given some harder songs to learn by the teacher, who also gave the same sheet to a friend of mine. This guy went on in later years to become a great guitarist. I’m not sure if he still plays but he got really good and would be a monster by now.

It was exciting and feels like it was only a few months ago, even though It at least 15 years ago!

Today, I always start by tuning and playing the student’s guitar. Most guitars actually are pretty good out of the box, thanks to modern manufacturing.

But I like to check that I can play it fairly well.  I don’t want to give them a disadvantage from the start. Some guitars come with high action, this only takes a few minutes to tweak with an Allen key.

Next, we’ll cover tuning, well standard tuning and why the guitar can go out of tune. I’ll talk about the myriad of different tuning out there, even though I only use two (standard and DADGAD) and explain that standard is probably the best tuning to learn on.

At this point, I’ll talk about chords and how we write them out. Usually, I’ll show them simple guitar chords like D and G – without talking about theory. Making sure they understand how it should sound, how they should sit and what a duff note sounds like.

Normally by this time, we used all of our hour together. If not, I’ll teach the beginning to REM’s “everybody hurts”. Hey, it’s just a simple finger picking around D to G!

Half the battle is getting the chord right, the other half is getting them to use it straight away and learning songs is the best way to learn something fully.

My job within this first guitar lesson is to sense the pace at which the student is learning. If the student can only deal with a small amount of information, I’ll slow down and only trying to cover what the student can handle.

After all, I’m not there to entertain myself. I’m there to pass on information to the student. If the student doesn’t get it – I haven’t done my job.  While that attitude might shock you, it’s the right way to see teaching.

I’m also aware within any lesson that it’s quite often what is not said. For example, if someone looks confused, they usually are! They might not say that they are as they conditioned from school to not step out of line! Crazy – if you don’t get something say so!

Also, as it’s the first lesson people might not feel comfortable to question or say “I don’t get it!”

At end of the first guitar lesson, I ask them how they felt it went and whether they want to continue to see me for lessons. It’s usually a yes!